As hype cycles go, the interest in 3D printing has been waxing and waning since, say, Martha Stewart got her hands on a MakerBot. As other manufacturers have been struggling to find their footing, the upstarts at Formlabs have been expanding on all fronts—settling their legal issues, launching a handful of functional resins—and are pleased to present a brand new piece of hardware: Today sees the unveiling of the Form 2 desktop stereolithography 3D printer. 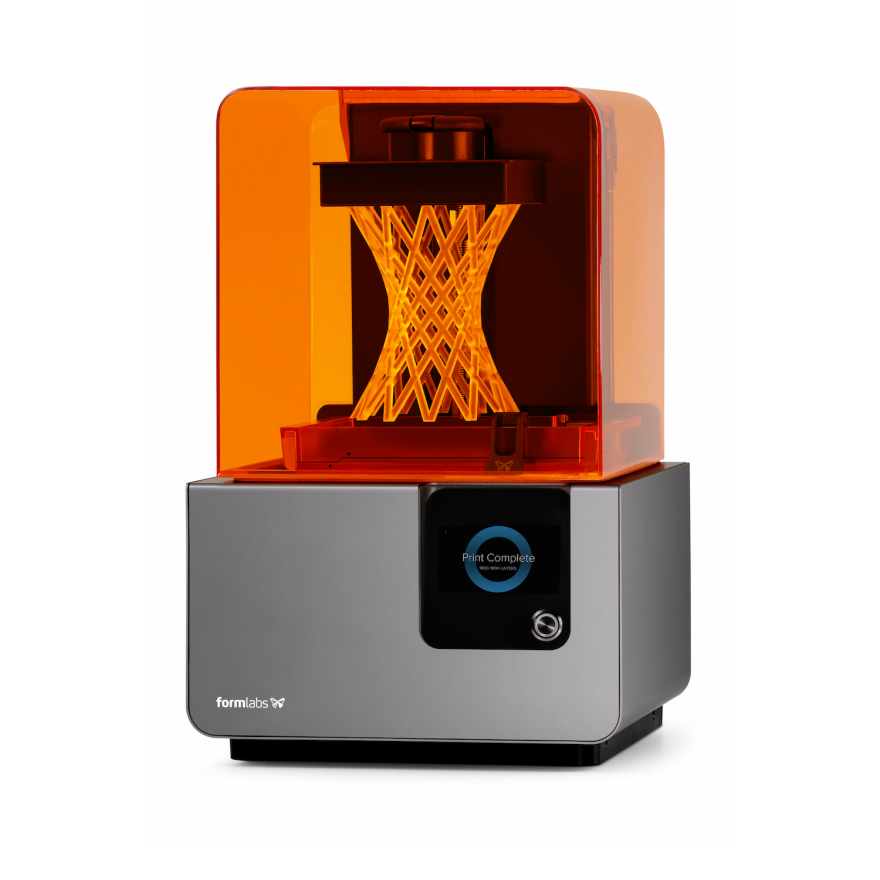 The Form 1 looked the part when it debuted to the tune of nearly $3 million on Kickstarter in October 2012, as a fully formed, consumer-ready product, in stark contrast to the laser-cut wooden panels of the first Cupcake CNCs and Thing-o-Matics. Indeed, for better or for worse, the Form 2 is instantly recognizable as a Formlabs machine: Characterized by a cube of electric-orange polycarbonate—transparent to the eye but impervious to UV—the build chamber sits atop the familiar aluminum base, its footprint slightly enlarged to the effect that the base looks more like a pedestal than before. The control panel has been upgraded from a single button next to the digital display to a proper touchscreen, but, other than that, Formlabs largely abides by the existing design language for the hardware.

Of course, it's the internals and intangibles that really matter. As one might expect, Formlabs' first new model since their launch boasts improvements across the board: substantially bigger build volume, 50% more powerful laser, the onboard touchscreen to complement various software dashboards, and more. "We went all the way down to the studs and built it again," says Colin Raney, formerly head of IDEO Boston and CMO of Formlabs as of 13 months ago, noting that the prototyping process had entailed 3D printing parts in-house (with the Form 1+, of course).

Raney is effusive about the new machine and its impressively upgraded specs—he notes the 42% larger build volume at a couple of points in our conversation—but he's also a realist (and, by his own admission, "not a big 3D printing person"). Hence, his acknowledgement of what he calls the "dirty secret of 3D printing": "Shit fails a lot." 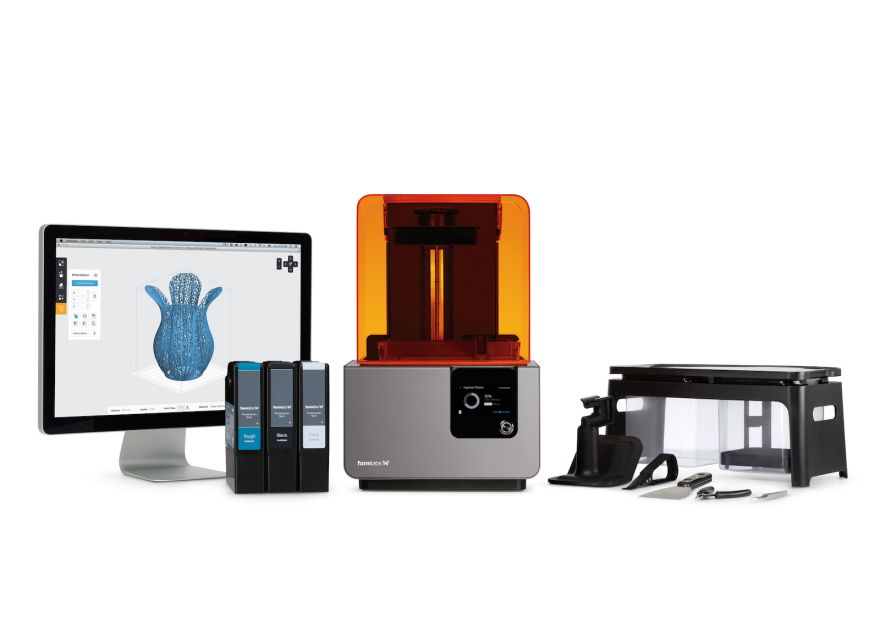 Just about anyone who has used a 3D printer—hobbyist or professional, FDM or SLA—knows that it is not by any means an exact science. Raney likens 3D printer users to musicians who become intimately familiar with their instruments, where each machine has its own idiosyncrasies. "Once you sink four or five hours into something that fails, you don't have to do it too many times before you're like, 'Screw this.'" Beyond any single feature, reliability is paramount, and Raney is confident that the Form 2 will deliver.

But perhaps the real secret—one that remains largely unspoken—is that 3D printing has *always* been best suited for prosumers, and Formlabs has long positioned itself as such. There are any number of reasons as to why 3D printers never quite achieved the two-cars-in-every-garage phase; Raney, for his part, offers a brief history of 3D printing.

If you back up, 3D printing is 30 years old—they used to come in these really expensive, huge machines, that cost hundreds of thousands of dollars, and you put them in your prototyping shop if you're [a big company like GE or Ford, and you have a technician run them, and all of your engineers make models and send them to the prototyping shop where they print them.
Then around 2009, there were these projects called RepRap and Fabbit Home, and that's when they started to make the desktop FDM machines that ultimately became MakerBot and UltiMaker and all this stuff… so the hobbyists really love the fact that they can build this thing and it's awesome, but then beyond that, this whole thing has kind of stuttered.

Formlabs, then, offers the best of both worlds: "A combination of those two ideas coming together—the really high-end technology and great parts, and the [higher degree of] access, so if you're a designer or an engineer, that thing can sit next to your desk."

Raney drives the point home with an analogy about established prosumer categories, acknowledging that "it's not cheap, but it's the price of a loaded laptop." $3,499 doesn't seem like that much considering that, "someone who gets into photo or video will pay just as much for a camera."

But whereas the average DSLR presents the user with a dizzying array of manual features, Formlabs is looking to simplify the interface—if not to point-and-shoot, then at least to full auto—which is precisely why a couple of the major updates on the UX side might be traced back to the putative ancestor of the 3D printer. You know, the desktop peripheral that you access with a quick tap of Command+P, so ubiquitous that it is absurd to think that 3D evangelists prognosticated that an underwhelming ABS extruder could ever be nearly as widely adopted. 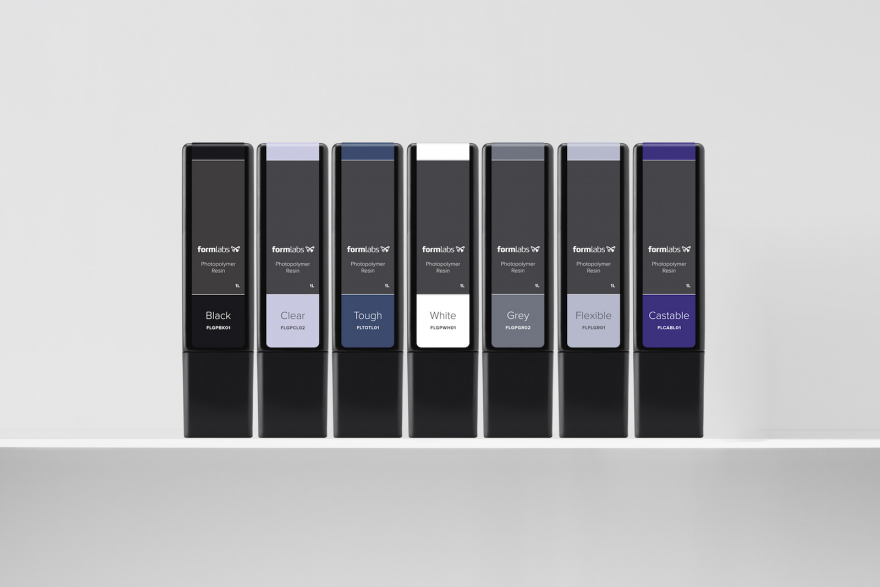 Formlabs isn't the first 3D printer company to introduce a cartridge system for loading resin, but there's no denying the convenience factor: "One of the biggest pieces of feedback that we got was the resin can be messy, so we put the cartridge in," says Raney. "Like a 2D printer, it will just dispense materials, so you don't have to open it up, you don't have to pour it in, you don't have to scrape things…" The jury's still out on, say, a Keurig coffeemaker, but it definitely makes sense for a 3D printer—imagine if you had to pour ink or toner into your old HP or Epson. (Raney also emphasizes that "it's not a DRM move," noting that users can load their own resin the old-fashioned way, by pouring it into the tank.)

And lastly there's the fact that the Form 2 is wi-fi enabled, which is commonplace for regular printers but is especially useful for a 3D printer, as it allows for custom notifications and a seamless dashboard experience across multiple devices in addition to simply being able to send files wirelessly. In fact, Raney cites wi-fi as an example of a technology that has long surpassed the point of novelty to effectively recede into the background of everyday life—i.e. you only notice when it doesn't work. "We're moving out of the stage of being fascinated that we can just print—now that needs to be kind of a given." 3D printing needs to become similarly frictionless. "It's kind of like wi-fi, [where] at first we were like, 'Holy shit, there's no wires, this is so amazing!' And now, the wi-fi just needs to work… it needs to become really boring." 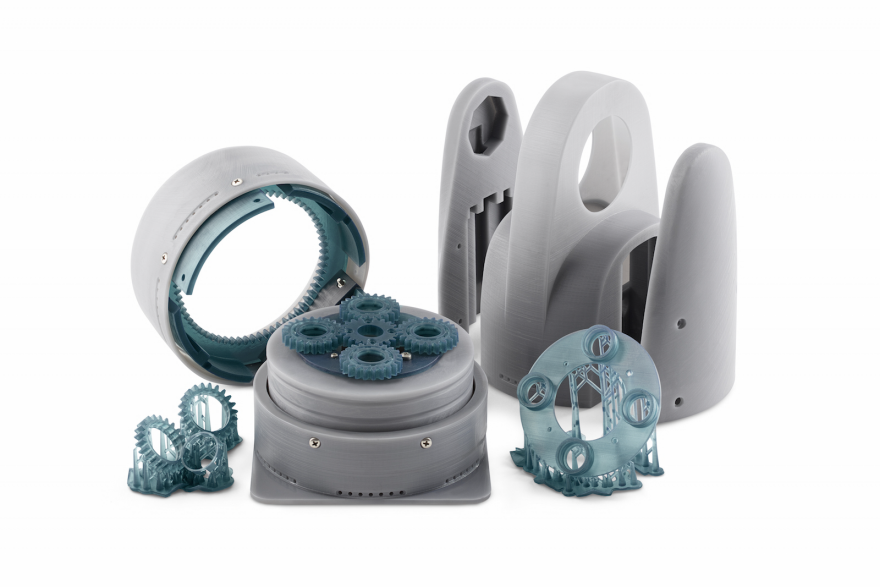 Printed parts from the Form 2

For now, though, he's excited about both the core audience—industrial designers and engineers—and other less obvious but equally specialized professions, which inspire new challenges for the various teams at Formlabs, from materials science to UI. Just as the Castable resin, launched last year, has been a boon for jewelers, the relatively straightforward interface (and high resolution) appeal to dentists and doctors. "One of the biggest uses of stereolithography is Invisalign braces," Raney relates. "[The orthodontist] scans your teeth and the model works up the individual teeth and takes it through an algorithm to straighten them, so it takes it through all of the stages. They print all of the teeth out and then they vacuum-form the retainer to the top of it."

It simply wouldn't be possible without the technology: "They have to 3D print it, because you need really sharp detail—your teeth don't have that many indentations to hold these braces—and it's completely one-of-a-kind." In short, "anything that is around the body or the human"—i.e. that which entails personalization—is a potential growth area. But perhaps one of the more unexpected use cases of desktop SLA has been for stop-motion animation: some two years in the making, French animator Gilles-Alexandre Deschaud completed the 3D-printed three-minute short film Chase Me earlier this year.

It turns out that Formlabs initially found out about Deschaud's project via their customer service channels ("we sent him some more printers and some resin"), an indirect upshot of launching on Kickstarter in the first place. The crucible of delivering backer rewards was a blessing in disguise, as Formlabs found themselves with in-house sales and customer service teams, which has allowed them to sell directly to customers instead of through resellers.

"We can learn a lot more about what our customers or users are actually doing," says Raney, "and we also have to hear when it doesn't work, which is really good humble pie, because it helps us make the printer better." Whether it's the target audience of prosumers — designers and engineers who rely on 3D printing for their livelihood — or passionate hobbyists like Deschaud, Formlabs remains committed to the end user and the Form 2 is a step towards that frictionless experience. "It's just people trying to run a people-oriented business… that has lasers."