An old Army saw has it that 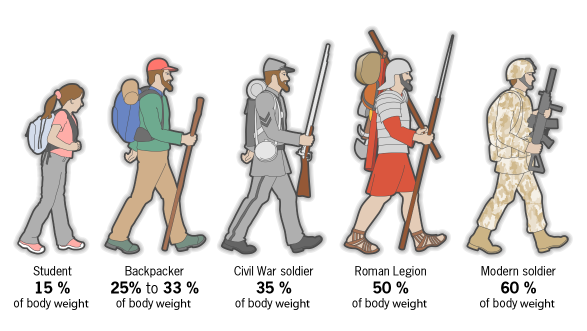 We think of soldiers as warfighters, but for even the most combat-hardened vet, the amount of time spent in firefights is a fraction of the time spent hauling their gear around. And that gear adds up: A soldier on the march might be saddled with an assault rifle, a sidearm, ammunition for both, a knife, smoke grenades, flashbang grenades, rations, water, medical supplies, tools, body armor, a flashlight, communications gear, extra batteries, night vision goggles, et cetera. (Members of crew-served weapons teams, i.e. mortars and machine-gun squads, have it even worse.)

All told, a soldier might be carrying anywhere from seventy to over 100 pounds of gear. Watch this soldier in Afghanistan step onto a scale while loaded up with "everything I go out with every day:"

What's even crazier is that sometimes soldiers with this amount of gear on are dropped out of airplanes—which can add another 53 pounds to the load. (The U.S. Army's T-11 parachute and harness weighs 38 pounds and the reserve chute adds another 15.) A veteran of the U.S. Army's 173rd Airborne Brigade based in Vicenza, Italy writes that "Gear weight of a paratrooper…hits up to 160 lbs out the door!"

To give you an idea of what this looks like, check out this footage of members of the 82nd Airborne Division, all wearing the T-11 rigs, jumping out of a C-17 over New Mexico. Be sure to watch for the guy on the far right of the screen around the 55-second mark:

It's strange how amazingly peaceful it looks—on a training mission, anyway—when the guy with a GoPro on his helmet jumps out of the plane.

To give you a more visual idea of where all of that weight comes from, here's footage of a soldier at Washington state's Joint Base Lewis-McChord being kitted out for deployment:

Even more illuminating is this footage shot in the field, in Afghanistan. Here Specialist Craig Brown points out the design features of the initial layer of clothing, then explains the locations and functions of each successive piece of kit he straps on:

Kind of puts things into perspective, doesn't it? I'll never complain about not having a MacBook Air again.

An Unusual Design for a Massive Bit Holder with Moving Parts
Variety is useful for a designer to encounter, and I love seeing how different people solve a shared design problem. It's also fun to try to figure out, absent a ...
READ MORE

2015 Dyson Award Finalist Faves: A Clever Way to Carry Clean Water in a Dirty Oil Can
We're pleased to see that design students around the world are killing it! This year's James Dyson Award received a record 710 entries, and the judges have finally whittled them ...
READ MORE

In a Massive Brooklyn Garage, a Man is Patiently Repairing 58 Classic Cars
For auto design lovers it's hard not to pine away for the 1950s, when America released bold, original shapes that became the envy of the world. Outside of Cuba or ...
READ MORE

“Massive, horrible and unavoidable”
Opinion: when the Tour Montparnasse was built in Paris, its residents were so appalled they banned all high-rises. Londoners should do something similar in the wake of Rafael Viñoly's walkie ...
READ MORE
An Unusual Design for a Massive Bit Holder
2015 Dyson Award Finalist Faves: A Clever Way
In a Massive Brooklyn Garage, a Man is
“Massive, horrible and unavoidable”