While a basic keychain works for many end users, others are looking for better tools. One problem with keys on standard keychains is that they don't tend to fit nicely into a pocket. Furthermore, some end users report that the keys have ripped their pockets, and some say the keys have stabbed them in sensitive areas. Other end users are disturbed by the jangling sound. And keys could possibly scratch a smartphone. 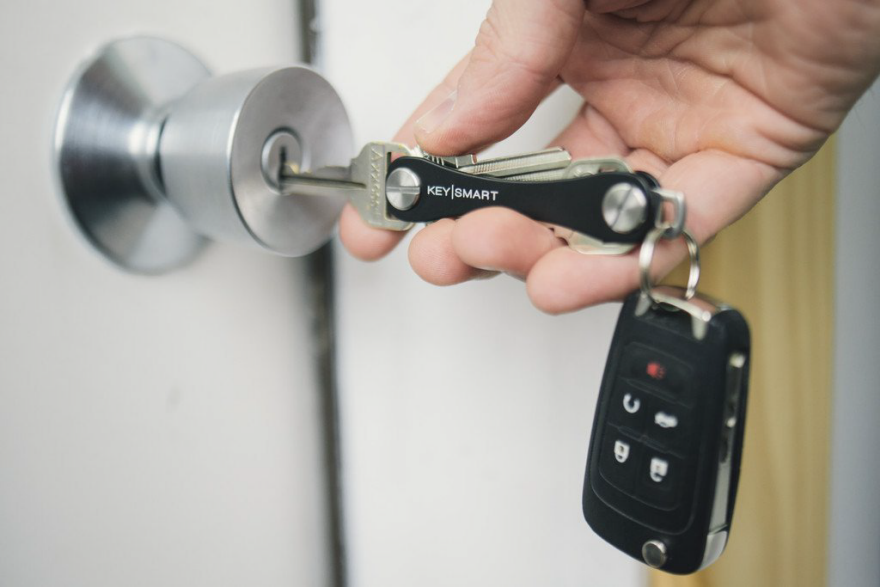 The KeySmart addresses these problems by using a Swiss army knife type of design, tucking the keys away. The basic KeySmart holds 2-4 keys; there are extension posts to allow it to hold many more. There's a loop on the end to attach a car key; that loop piece takes up one key slot. And optional USB drive takes up two slots. Many other key holders use the same basic design as the KeySmart, including the Keystone, shown at the top of this post, which has a Kickstarter funding on Oct. 29. 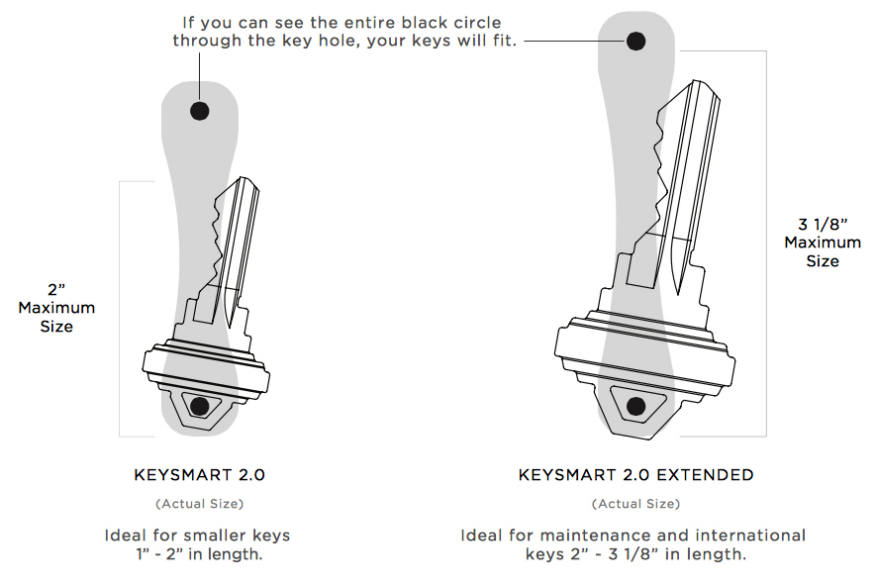 The KeySmart comes in two sizes, and the company provides a sizing PDF so end users can make sure they are getting the size that will work for them. That's a smart idea.

The original KeySmart is lightweight, being made of aluminum (with stainless steel hardware). While many end users are delighted with the KeySmart, others complain that it isn't rugged enough, especially if expansion posts are used. There are numerous reports of the KeySmart falling apart or needing the have the screws tightened very frequently (daily, every other day, weekly). Others have had problems with the screws breaking or easily getting stripped. There's now a titanium version, which may be less fragile. 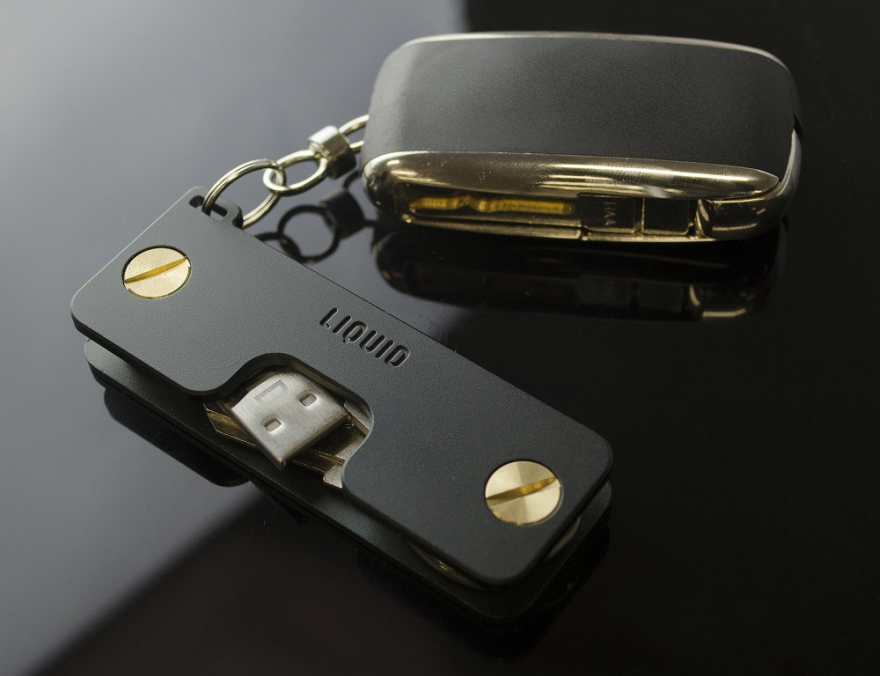 Some other key holders with a similar design specifically address the "falling apart" issue. Liquid said this about its key caddy when it was in its Kickstarter phase: "The post and custom screws that we made may seem small and simple, but it required immense engineering in order to make a product that works without screws constantly loosening and falling apart. Our designers and engineers got help from one of our great Australian engineer friends who's been working in the industrial engineering industry for 20+ years and brings a wealth of knowledge and experience." 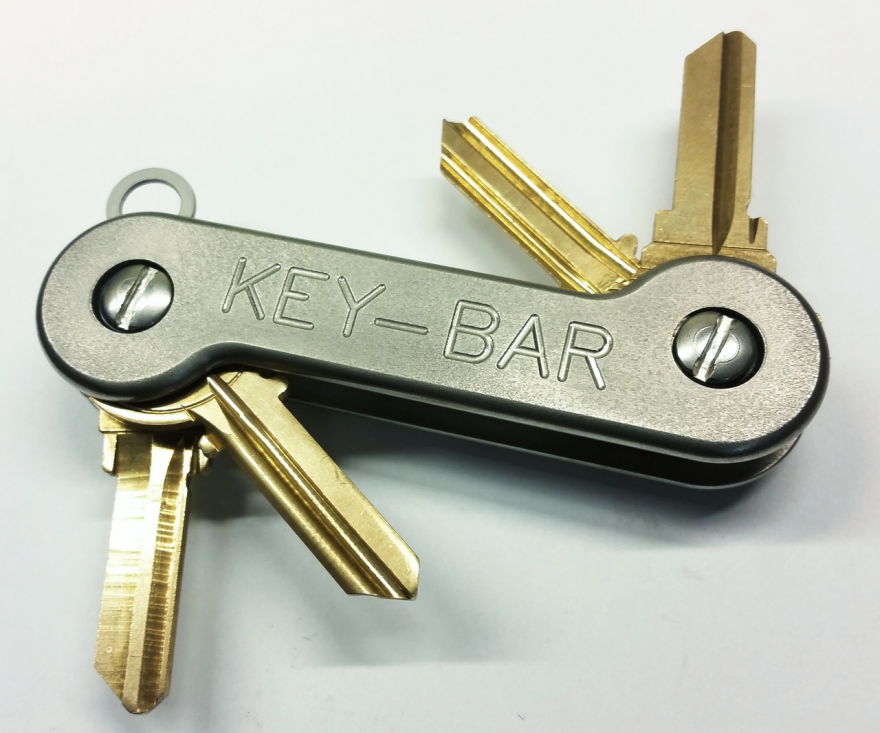 End users have noted that the Key-Bar is bulkier than the KeySmart, but also "far more robust and sturdy." That's a trade-off many end users will be glad to make. 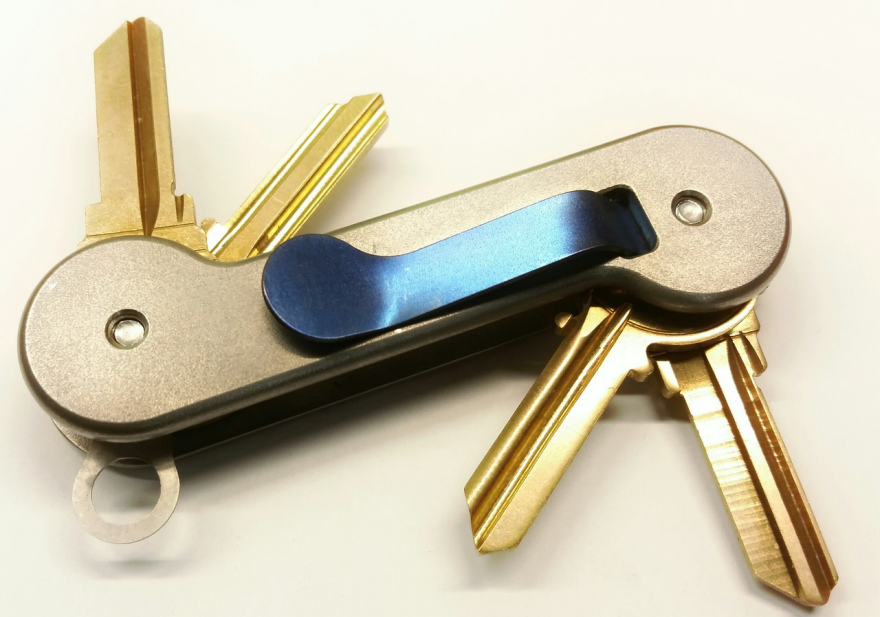 There's a removable pocket clip on the back of the Key-Bar. There are also a number of thoughtful accessories; one of them is the Keyrabiner, which serves as a carabiner but folds back inside the Key-Bar when not in use. 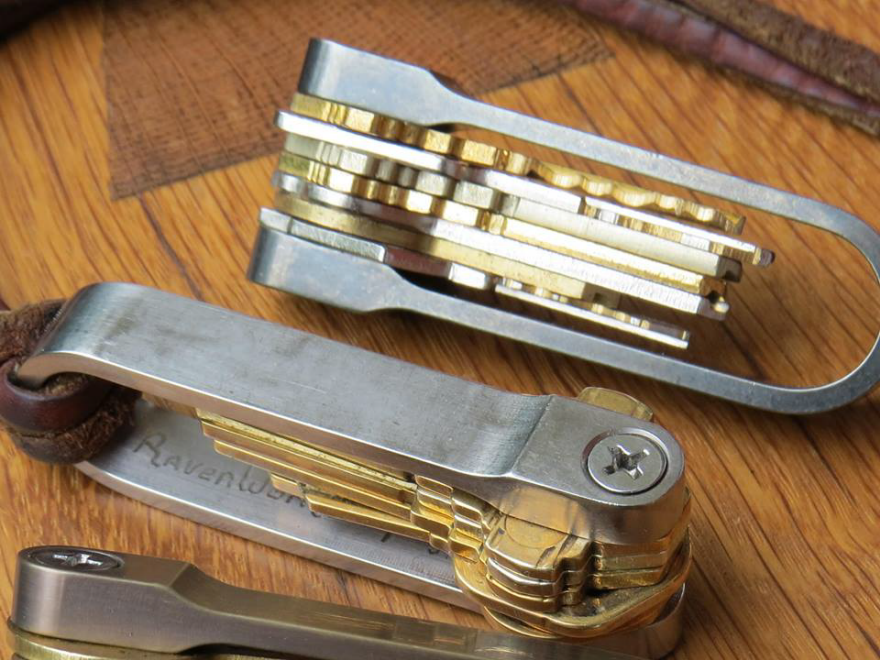 Some end users have found the double-ended Swiss-army-knife-style key holders a bit complex to assemble. They might appreciate the somewhat simpler design of the KeyGrip, from Raven Workshop. Unlike the double-ended designs, the KeyGrip can't be expanded; that limits the number of keys it can hold, but it also makes for a simpler (and perhaps stronger) design. The keys are also somewhat more visible, which might help the end user find the correct key more quickly. 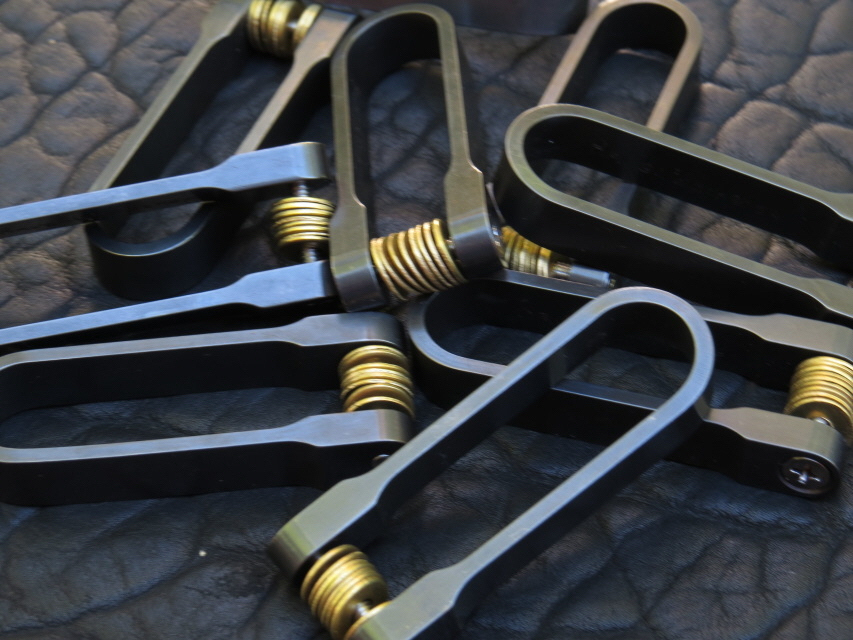 The KeyGrip can hold up to six keys; there are brass spacers to hold keys in place if the end user has a smaller number of keys. 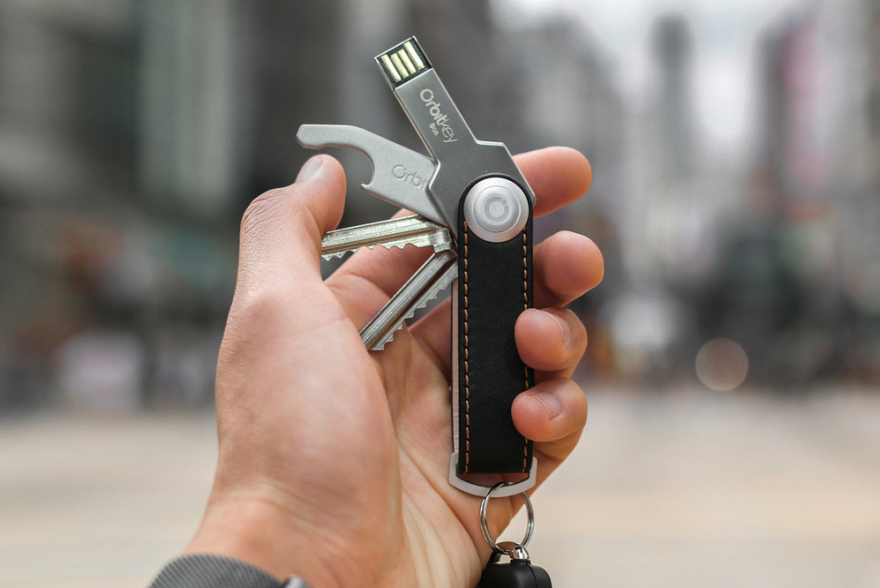 OrbitKey has a somewhat similar design, but it's made of leather or elastomer. This is another product that emphasizes its locking mechanism. As the Kickstarter pitch said: "Our custom designed locking mechanism solves the issues that normal screws have. It is specially created to stop your keys from coming undone over time and it also allows you to adjust how tight your stack of keys are."

One minor drawback for European users: One purchaser noted that no Euro coins fit the slit in the locking mechanism. (The mechanism can be tightened and loosened with a fingernail, but it's easier to do with a coin.) 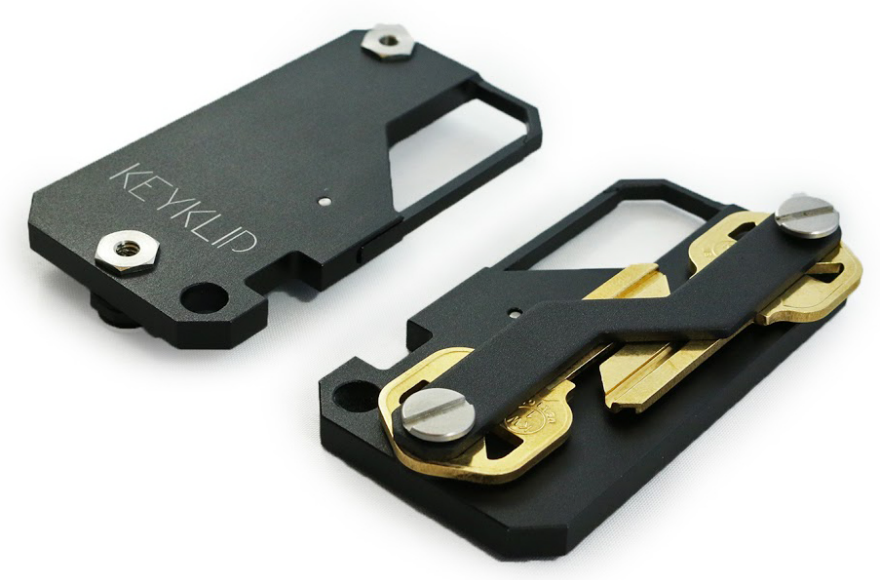 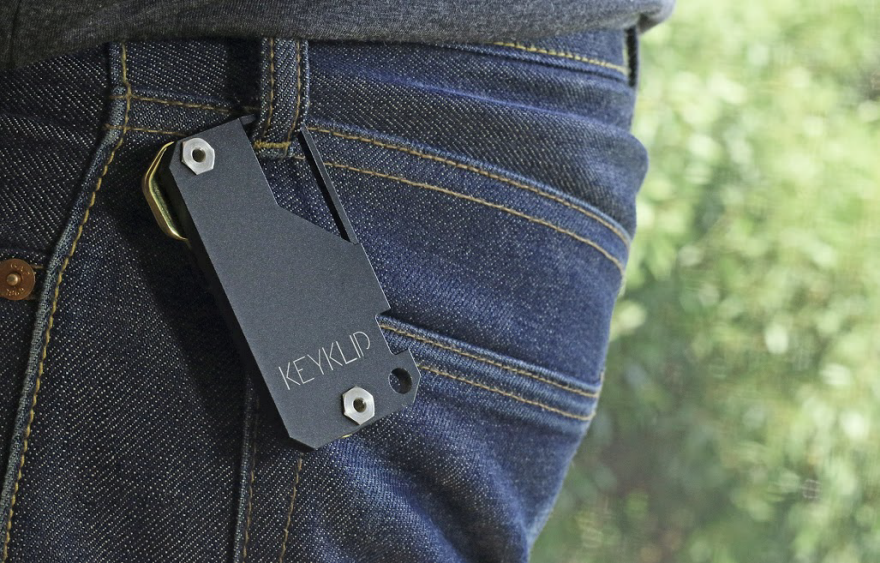 For end users whose primary concern is being able to clip the key holder to a belt loop (while still keeping the keys together so they don't jangle) there are designs like the KeyKlip. The Kickstarter for this product will be funded on Nov. 21. It has a slot to attach a key ring for those car key fobs, but that would make hanging it from a belt loop a bit awkward. So this product is probably best for those who don't mind carrying a car key fob separately or who don't need to carry one at all. 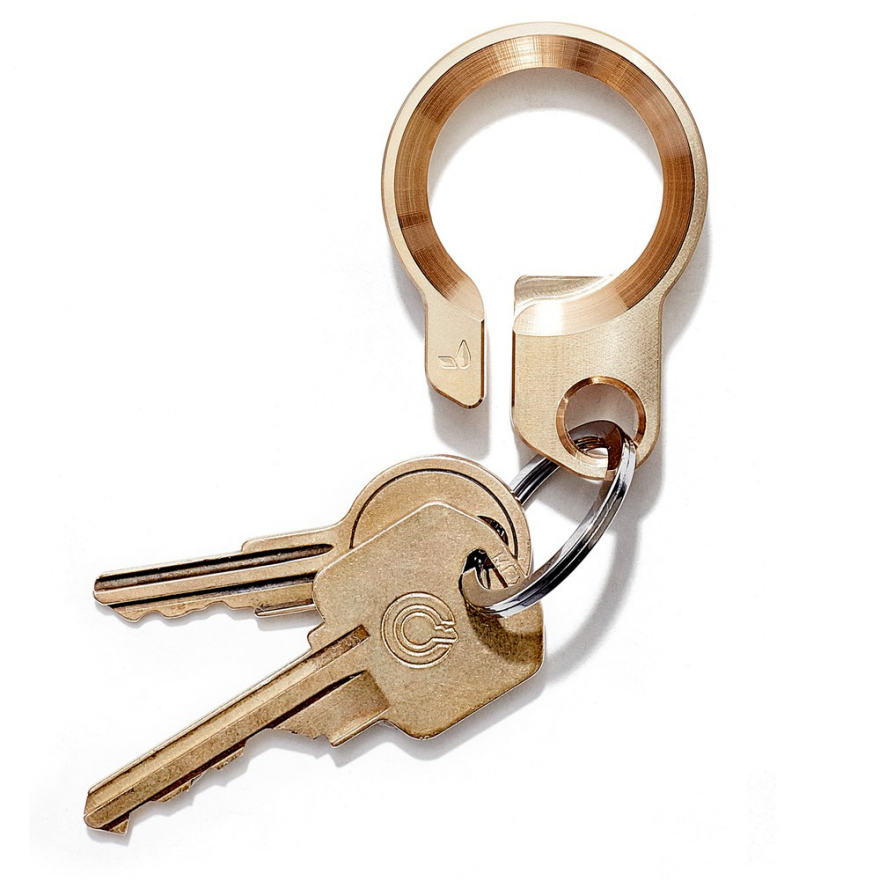 While carabiners are a popular way to deal with keys and belt loops (for those who don't care about jangling keys), the key rings from Grovemade can also do the job; this one is made from solid brass. As Grovemade points out, this is a product which is practically indestructible (which so many others are not). 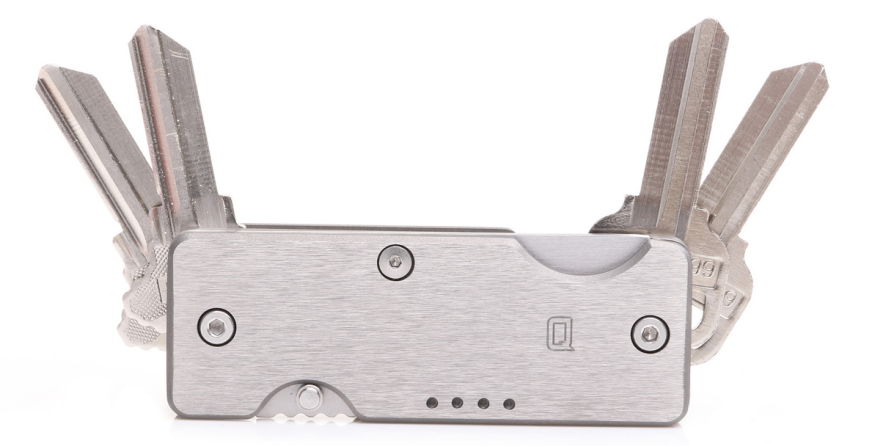 I've mentioned the Swiss-army-knife-style key holders — but about end users who like to carry an actual Swiss army knife? While it's not the same as carrying that knife, the Mini Q does provide a combination knife and key holder, allowing the end user to carry one item instead of two. There's a choice of blade styles, and both locking and non-locking knives are available. 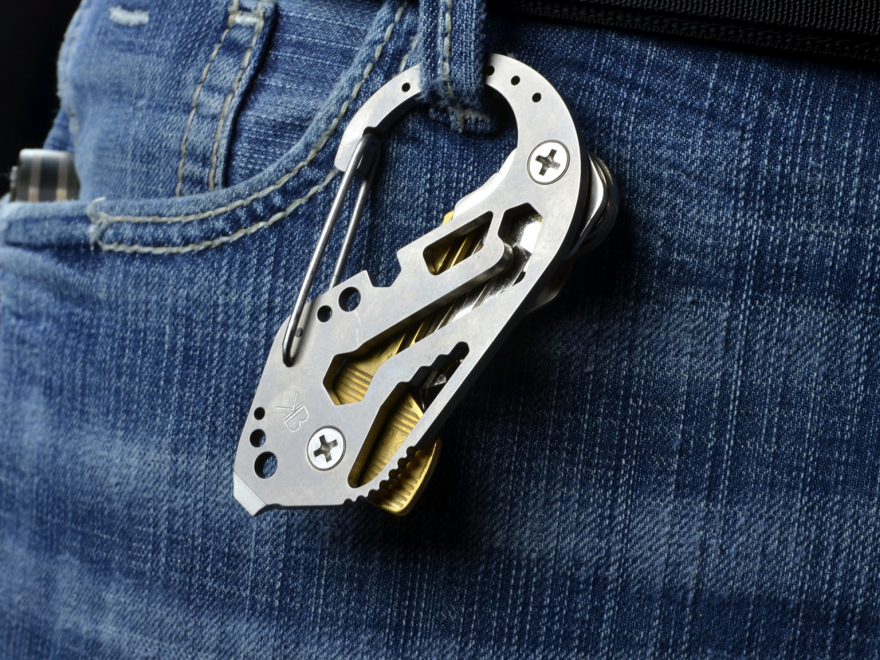 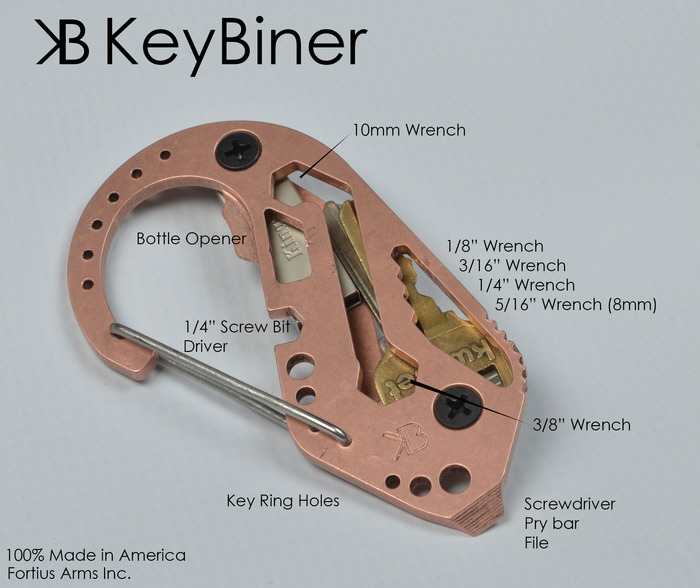 For those end users who want to carry a range of tools (but not a knife), there's the KeyBiner from Fortius Arms. It's not clear how well those tools work, though, especially when the keys are loaded; some Kickstarter purchasers have reported problems with the bottle opener. Using those wrenches looks like it might be awkward, too. 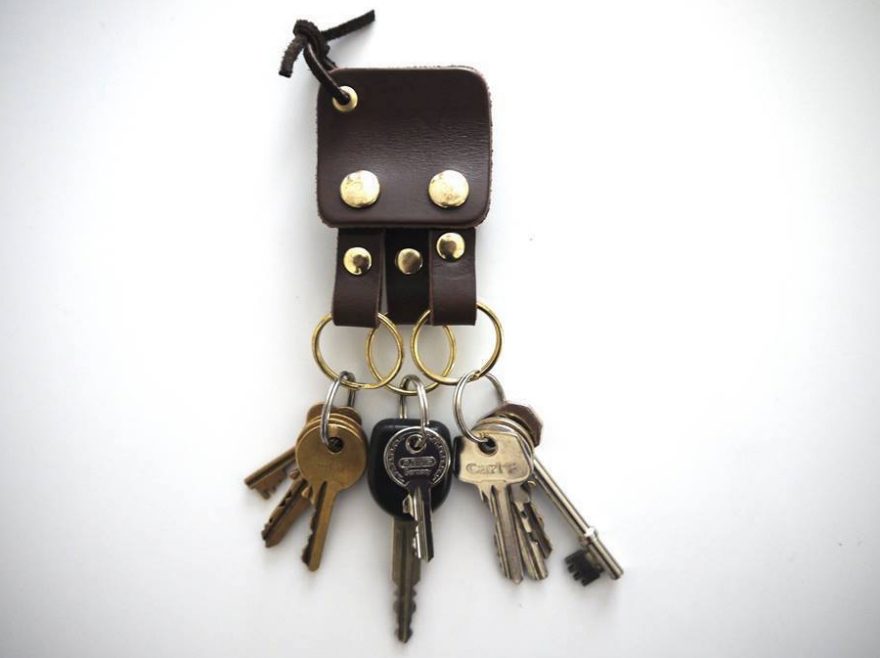 For some end users, a primary concern is being able to easily remove a key (or a group of keys) when necessary: to hand off to someone else or to make the keychain less bulky when not all keys are needed. The GoKey is intended to help with that, with three sets of keys that can be removed independently. The GoKey Kickstarter has until Oct. 18 to meet its funding goal.

Another design that makes it easy to remove keys is the Swivel key wallet. It's held together with internal neodymium magnets (coupled with a stainless steel locking pin), so there are no screws to deal with (and possibly lose). This would work well for end users with medical conditions which limit their dexterity, making small screws hard to deal with. The creator says that "even a drop from 5' to a hard surface will not spring open the key wallet."

Another advantage of the key wallet: It can be placed on any surface that holds magnets. This is a Kickstarter project that will be funded on Nov. 14.

The Roman “Swiss Army knife”
If you think the Swiss invented the concept of the multi-functional tool, you are wrong. Over 1800 years ago, the Romans already had some pretty well designed tools with more ...
READ MORE

Crowdfunding 101: Failing in Public and Coming Back
Last summer, my little company launched a Kickstarter campaign for a Bluetooth successor to our Range smartphone thermometer. Unfortunately, as sometimes happens, our campaign failed and everyone went home empty-handed.Failing ...
READ MORE

Designs for Small Kitchens: Dish Racks
Many apartment dwellers and homeowners need to cope with small kitchens, or at least kitchens with limited counter space. A big countertop dish drainer isn't going to work, but they ...
READ MORE

Combining Bed Risers with Power Strips—Badly
We here at Core77 are always on the lookout for things that need designing, in hopes of inspiring you entrepreneurial designers to attack the problem and make yourself some bread. ...
READ MORE
The Roman “Swiss Army knife”
Crowdfunding 101: Failing in Public and Coming Back
Designs for Small Kitchens: Dish Racks
Combining Bed Risers with Power Strips—Badly